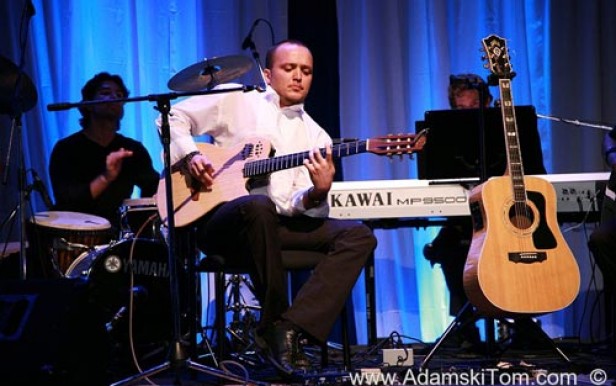 Despite the fact that he didn’t pick up a guitar until the age of 18, it seems that Juneyt was destined from birth to be a musician. His name, traditionally spelt Cuneyt, means “Soldier of Music” in his native Turkish, and has proven to be an extremely accurate prediction of his life path.

Born and raised in Istanbul, Turkey, Juneyt has been playing Flamenco guitar for 13 years and has been especially influenced by Paco de Lucia, Tomatito and Vincente Amigo. Drawn to the passion and raw emotion of the music, Juneyt plays mostly in the Nuevo Flamenco style popularized by Jesse Cook while staying true to the playing and picking techniques of the more traditional flamenco guitarists.

Juneyt began his career in music as a teenager, playing alongside many well-known musicians in Europe and performing as a studio guitarist on more than 15 albums. Since moving to Canada in 1999, Juneyt has composed music for two television documentaries, and has built his career as a professional musician playing gigs in and around his hometown of Kitchener-Waterloo. Both at home and throughout the greater Toronto area, his energetic style and incredible finger work have earned him an enthusiastic following.

On September 26th, Juneyt released his first solo album entitled, “Ocean”. The recording is a collection of new original songs by Juneyt and captures the heart of his music and passion. The CD was launched with an exclusive concert in Kitchener where Juneyt performed much of his original work along with popular pieces by other artists including, Strunz & Farah; the Gypsy Kings and Jesse Cook.

An impressive guitarist, held in high esteem by many of his musical peers, Juneyt possesses a rare talent and a raw energy that electrifies the audience making him an exceptional performer to watch. He was joined on stage during the evening by both flamenco dancers and guest musicians, including well-known multi-instrumentalist Arun Pal and the sensational Jazz pianist, Tim Louis.