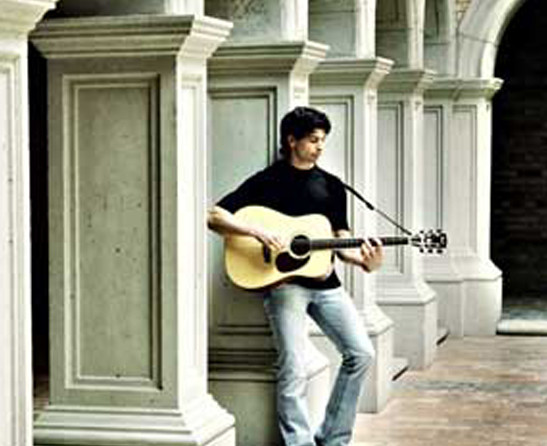 “Arun Pal oozes talent”, “Arun is just as engaging a singer and piano player as he is as a percussionist” (Michael Barclay), “To say Arun Pal is prodigiously talented is an understatement” (Errol Nazareth – CBC Radio 1).

Arun’s range as a writer and performer is opening doors as his career grows in every aspect. He is an accomplished singer-songwriter (4 full band-solo albums), has just released a new music video and as an engineer/producer/performer has contributed to over 40 albums of almost every musical style.

Arun has also collaborated with the most revered modern dance choreographers in Canada both as an accompanist and composer. As a result, Arun was recently commissioned to create a work for the world renowned Penderecki String Quartet.

Arun has the ability to be the highly energetic front man in his 5 piece band or perform solo while doing everything from the intimate singer/songwriter vibe, to playing piano, drums and singing at the same time. He is also regarded as one of the most versatile, original and skilled drummers in Canada.

Arun has long been known as a multi-instrumentalist performer, composer, producer and recording studio engineer. He has established his name in the world of modern dance as an accompanist/composer highly recognized for his ability to play piano, drums and sing at the same time. Also with over 40 albums to his credit, he is no stranger to the process of taking the first inspirational moment of a musical idea and keeping the passion of that idea right through to the finished product.

With an ability to wow audiences with the pure range of his voice or through the musicianship of his keyboard, guitar or drumming skills, Arun has gone on to perform thousands of shows. He has worked with people such as the late Matthew Osborne, snack!, Eccodek, Rebecca Campbell, Order of Canada winner David Earle, Bob Egan (Blue Rodeo, Wilco) and Luke Doucet, all the while frequenting venues such as CTV’s Canada AM, Ontario Place, Center in the Square, Festival of Friends, Hillside Festival, The River Run Center, Nashville, The Canada Summer Games and performed for the Prime Minister’s National Campaign to mention a few. He has had the privilege of opening up for acts such as David Usher (Moist), The Skydiggers, The Bourbon Tabernacle Choir and Amanda Martinez.

With a shifting focus towards his band, Arun toured through parts of 2006 and 2007 in support of his double album entitled ‘It’s Time, Once Again’. It didn’t hurt that Arun was being likened to other well known artists as he pushed his own material more and more. “Like fellow drummers Andy Stochansky and Hawksley Workman, Arun uses his new solo work to flex some singer-songwriter muscles”, on Once Again “his strengths as a singer, songwriter and pianist truly shine” (Exclaim). Becoming known in various circles as a “gifted writer”, he is finding it easier to steer his very diverse career into the direction of “singer/songwriter meets full band experience”.

After recently being honoured with the ‘Musician of the Year’ at the KW Arts Awards, there have been more rave reviews to follow. Things such as “prolific writer”, “prolific session man” and “his compositions are densely layered both musically and lyrically” (Kitchener-Waterloo Record), “Arun is one of the most talented musicians that the region’s ever produced”, “Arun is as proficient in the studio as he is live” (Echo Magazine), “As a drummer he is a man with 4 hands” (Imprint Magazine), “Arun is heavily known as one of the region’s most acclaimed percussionists” (Byron Jay – Songwriter’s Association of Canada). “Arun Pal oozes talent”, “Arun is just as engaging a singer and piano player as he is as a percussionist” (Michael Barclay), “To say Arun Pal is prodigiously talented is an understatement” (Errol Nazerarth – CBC Radio One), “Pal’s evolved melodic content supports David Earle’s intent. It also lends emotional texture to it’s most lyrical moment” (National Post).

In August of 2008 Arun’s new album ‘Kurdaitcha’ was just released! Fresh off performances in Montreal, Ottawa and Toronto (Hugh’s Room) a new series shows are being booked in support of the new CD. The new music video for his single ‘Each Time’ is also in the final stages and will be available in the coming month. New DVD material is in the works as well and will feature Arun playing drums, piano and singing at the same time.